Annual Banquet presented by Turner Brothers Real Estate is Feb 24, 2022 is On!

This signature event is a popular event with an average attendance of 400 or more, which begins with live music, a catered dinner and plenty of time for networking. Our event will be hosted at The Base and will include the President’s annual report, a brief speech from the incoming Chamber president, and award recognition for Business of the Year, New Member of the Year, Ambassador of the Year, and Volunteer of the Year awards. The scholarship presentation is then followed by the keynote speaker, Glenn Robinson!  Reservations required.

Where is the banquet held?

Is the banquet open to everyone?

Yes, members and visitors alike are welcome to attend! Greater Hewitt Chamber members may purchase tickets for $75 each or a table of 8 with reserved seating for $500. Elected Official Visitor tickets are $75 and non-member Visitor tickets are available for $85 each (open seating). Visitor tables available at $650.

What is the dress code?

The banquet dress code is business casual. Many of our attendees come straight from work to the event.

What is the menu?

Each episode Glenn and Jacob Robinson (father and son) bring you interviews with industry shaping leaders from all walks of life to discuss their leadership principles and how that mixes with their faith. You will hear the stories of success and failures from individuals in hopes that it will help you write your own story. From politics and healthcare to non-profit and ministry we hope you are encouraged and inspired as these people tell you how they are Chasing What Matters.
CLICK AND SCROLL TO BANQUET TO RESERVE YOUR SEATS!

Regarding tickets: Your online reservation confirms your seat (no tickets will  be mailed for the banquet). Attendee names are on the reservation list alphabetically by business and number of seats. A seating chart and ushers will be available to guide you to your seat. 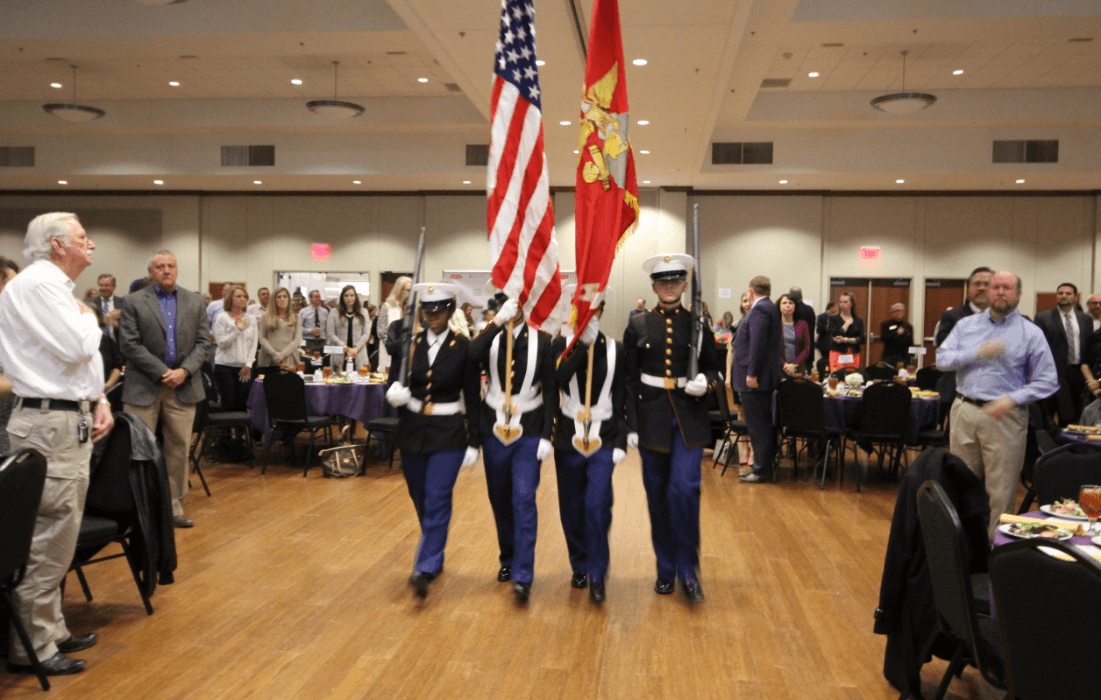 Glenn Robinson served as President of the Waco, Texas Region of Baylor Scott & White Health from 2007 to 2020. Upon his retirement from the role as President in 2020, Glenn launched Pacer Consultants, LLC specializing in leadership coaching and healthcare consulting. Currently Glenn works as a consultant with Baker-Tilly, a Top-10 International Financial and Accounting advisory firm serving on their Healthcare and Life Sciences team.  In addition, he serves as an Executive Coach for a number of leaders and organizations across the country.  Also, in 2020, Glenn and his son Jacob launched a weekly father-son podcast called Chasing What Matters that focuses on leadership and faith.

Glenn came to Waco, Texas from Spartanburg, South Carolina, where he served as CEO of Mary Black Health System. Prior to that, he held CEO positions at a number of other hospitals in Alabama, Oregon, and Texas. Glenn is a graduate of the University of Alabama, but, like all good Georgia boys, still roots for his beloved Bulldogs. He completed his graduate schoolwork at Trinity University in San Antonio, Texas, where he earned a Master of Science in Health Care Administration in addition to a new-found love for a perfectly smoked Texas brisket.

Glenn has more than 30 years’ experience in hospital and healthcare management, he is board certified in healthcare management, and is a Fellow of the American College of Healthcare Executives. He also teaches in the MBA Program at Baylor University and serves as an Adjunct Lecturer for Trinity University. Glenn has been the recipient of a number of professional awards, including being named to Tenet Healthcare’s CEO Circle of Excellence in two separate years. One of his personal crowning achievements has been developing a technique for cooking the perfect slice of bacon.

A Past-Chair of the Greater Waco Chamber of Commerce, Glenn remains an active member of the Waco community and currently serves on the Executive Committee of the Waco Business League and the Board of Prosper Waco – a community collective impact initiative.  Glenn also serves on several advisory boards at Baylor University including Truett Seminary and the Robbins College of Health and Human Sciences.  Glenn previously served as a board member of Pine Cove Christian Camps and Hannah’s Hope Ministries – two non-profit organizations centered on faith initiatives. He also served on the Board of Restoration Gateway – a ministry that operates an orphanage and a 120-bed hospital in rural Uganda.

Glenn and his wife, Rhonda are active members of Harris Creek Baptist Church in Waco and they have three children: Josh (married to Lauren), Jacob (married to Melissa), and Sarah Kathryn (married to Jordan Hannah). In his spare time, Glenn is an avid reader. He and Rhonda enjoy traveling – but most of all spending time with their six grandchildren – Pierce, Caden, Colt, Annie, Elijah and Chambers – (and grilling on his Big Green Egg).

Purchase a raffle ticket to enter for a chance to win one of our luxury packages! The committee is offering a trip to a Mega Gift Card Basket to your local shopping boutiques, favorite restaurants, hotel stays and more!

Packages are valued at $500+. Tickets are available for $20/each or six for $100, and proceeds benefit the Greater Hewitt Chamber Scholarship Fund. Winners will be drawn at the end of the banquet on Feb. 24 2022 (need not be present to win). 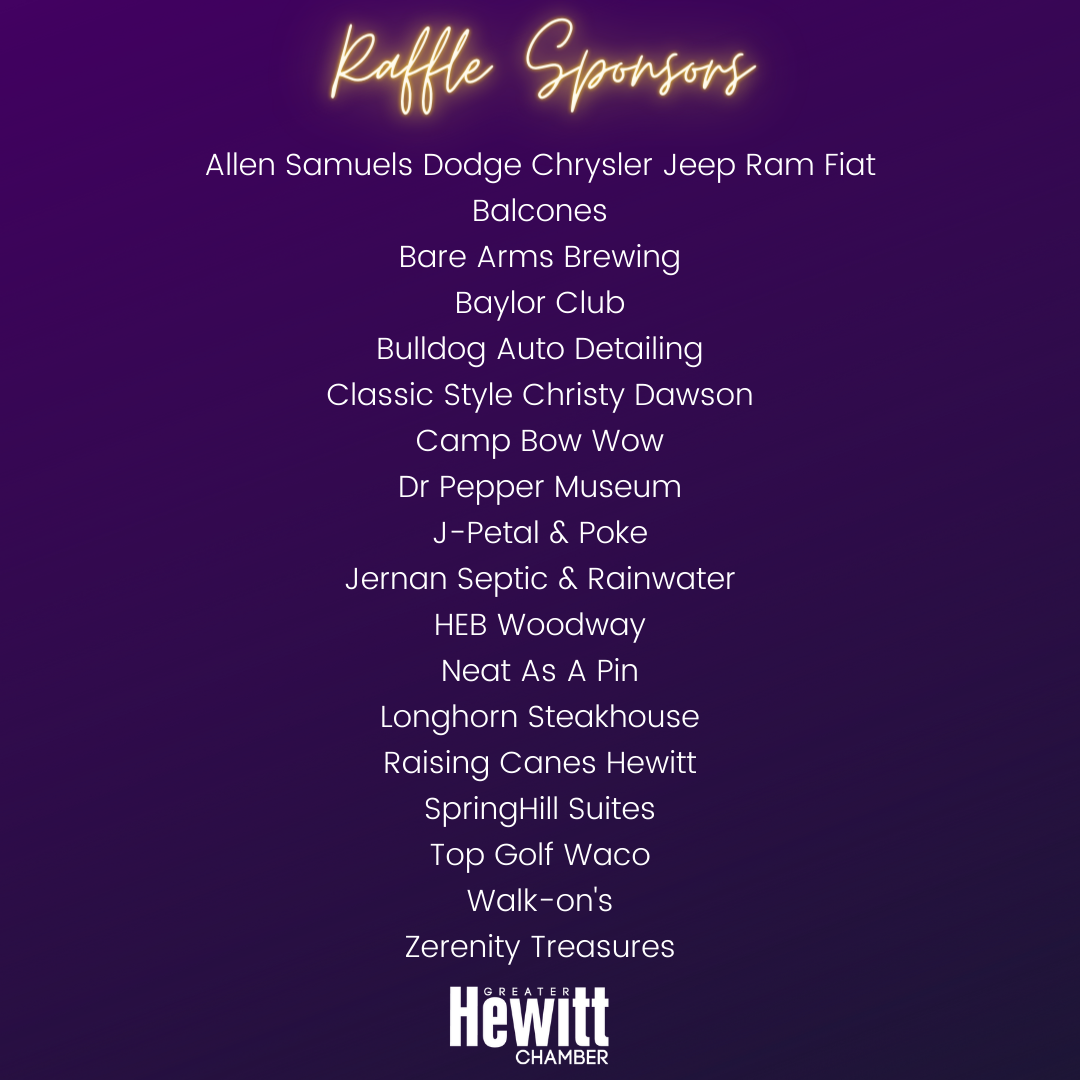 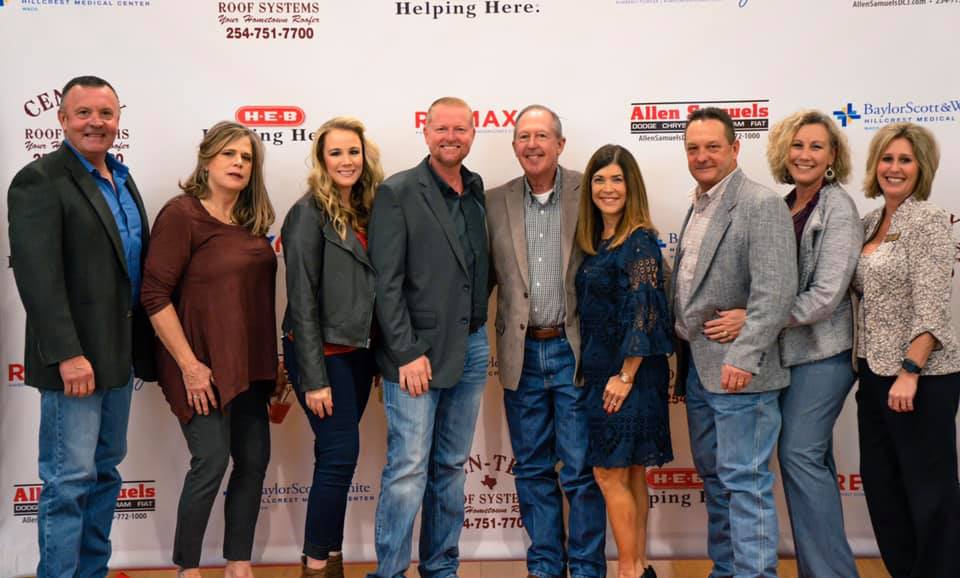 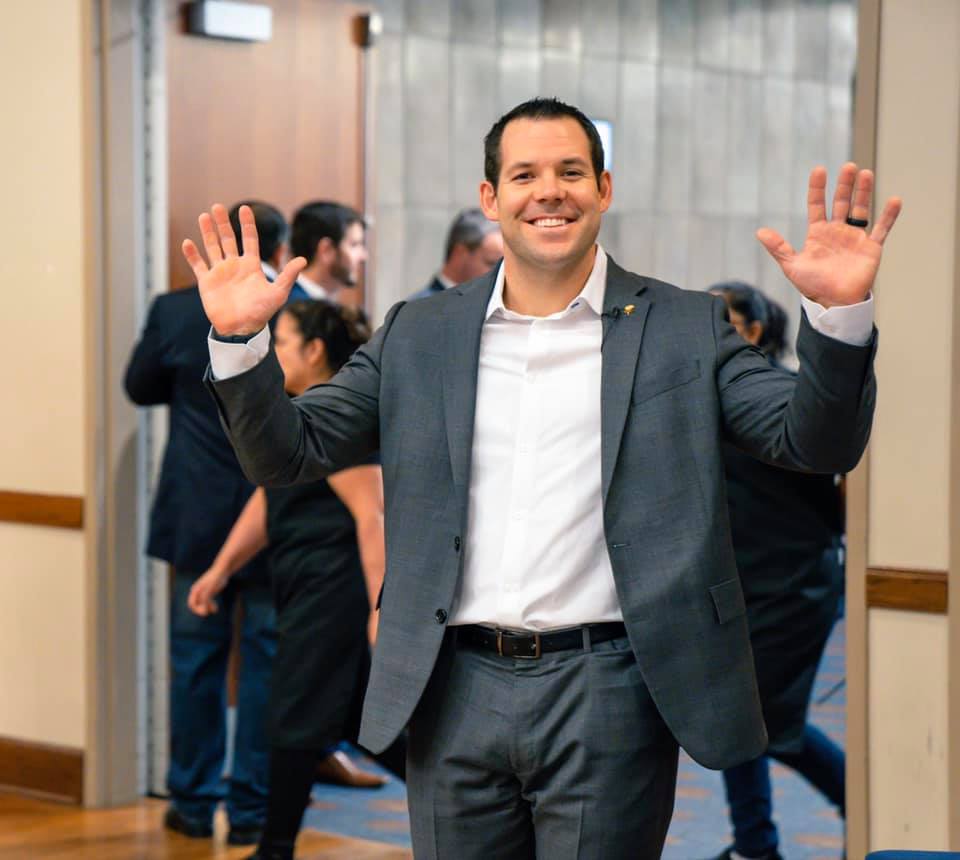